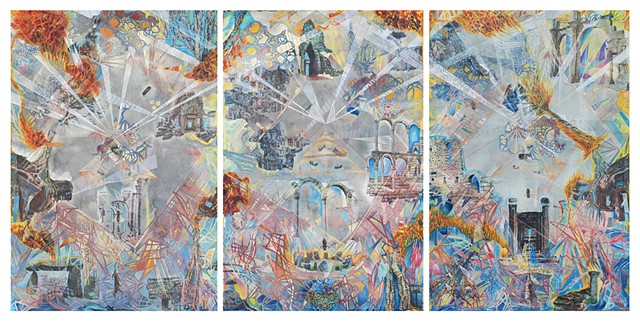 UN-NATURAL BLUE-SKY My current work is realized through multiple layers of monoprinting, drypoint, and hand-painted high-density watercolor ink. A symbolist in my approach, I’m interested in visual and thematic parallels between apocalyptic mythos and the Holocene extinction, our present and ongoing sixth great extinction event, where ancient species are dying off en masse due to climate change. The theme of apocalypse—from the Greek word apokalypsis, meaning “to reveal”—has driven me to articulate what the future might “reveal” regarding the natural world. As our ecological crisis intensifies, humanity’s struggle with itself also intensifies through social unrest, toxic polarization, global pandemics, violence, and war. In my work, this conflict and unrest are exacerbated by modern day conspiracy theories and harmful, science-denying myths, and I interrogate such narratives within a broader history of religious myth.

Stephanie Kolpy is Senior Lecturer of Art in the focused areas of Drawing, Painting, and Printmaking at the Ernest G. Welch School of Art at Georgia State University in Atlanta, Georgia. Kolpy has participated in over 80 international, national, invitational, and regional exhibitions with four solo exhibitions since 2003, and one additional solo show in 2024. Since 2003, she has received over 20 awards based on her own portfolio and has been included in 30 art publications or critically reviewed publications including the book NOPLACENESS: Art in a Post-Urban Landscape, highlighting contemporary southern artists, and most recently, The Hand Magazine, a competitive journal publishing printmaking and photography. In 2019, she received the Don A. Tilton Purchase Award from the Delta National Printmaking Exhibition. In 2022, she received the Juror’s Award in Artist’s Vision 2022 International. Kolpy’s work is in the permanent collections of the Bradbury Museum in Arkansas, the Zuckerman Museum of Georgia, and the Yun Xiang Ju Group / Baoding City China Cultural Museum. Kolpy continues to participate in and curate many international and national group exhibitions, such as her curatorial project for the Southern Graphics Council International Printmaking Conference in 2017, where she curated the solo exhibition for internationally acclaimed artist Sue Coe and her show, The Animals’ Vegan Manifesto, for the Welch Gallery. In 2020 at the Welch Gallery, she curated Higher Ground, featuring the work of painter Josh Dorman, which included a multimedia experience at the Kopleff Recital Hall at GSU and funded by the CENCIA Spotlight Grant. In 2021, she received The Visiting Artist Series Grant for a joint curated show called CRASH in combination with the exhibition, Colliding with History: African American Works on Paper from the Collection of Wes and Missy Cochran.